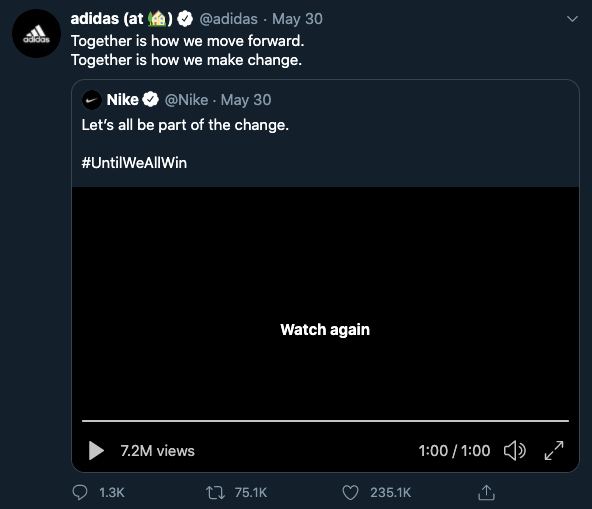 adidas recently supported Nike in their fight against racism by retweeting a video Nike has tweeted. The video had a very serious message centered around the recent George Floyd incident and it said, “For once, don’t do it”. adidas, understanding its responsibility as a brand which stands against racism, retweeted with a message which said “Together is how we move forward. Together is how we make change.”

The A&M industry equivocally supported adidas’s move and praised both the brands for standing up to the rights of people of colour and calling out the wrong. We asked some experts from the fields of marketing, creative and brand consultancy about the immediate effects this move will have on both brands and their consumers.

Karan Kumar, Chief Marketing Officer of DLF responded by saying “I think audiences respect brands that put out credible messages that represent their moral compass. And if competing brands come together to support each other’s message, respect for such brands will only increase. One brand may have taken the lead to put its message out there, however, if another follows in its support then it reflects well on that brand’s character as well”.

Corroborating with his views, Manish Bhatt, CCO of August Communication said, “..this issue is beyond petty brand rivalry. Every brand must have a stand on an issue that’s so relevant for not just the nation, but also their core TG..”, Bhatt critically adds, “it would (have been) be better if adidas had their own take on this topic, instead of sharing a Nike post”

Despite the risks involved, adidas took a stand & endorsed Nike’s fight against racism. While evaluating the risk adidas took, Bhatt further adds, “..Nike has always stood by this issue, especially with their (in)famous ‘take the knee’ campaign with Colin Kaepernick, it is atypical for adidas. If we go by the rules of branding, Nike already has the first mover advantage on this issue, and the support puts adidas in the dreaded ‘also ran’ category”.

KV Sridhar aka Pops strongly feels that brands should come together for a common cause.  He says, “As a responsible brand, one shouldn’t always criticise the competitors. When brands stand for certain values, consumers expect them to live by those values. So as a brand, you cannot discriminate your customers. Even if some other brand is fighting for the cause, as a brand standing for its values, you have to support those other brands. Consumers expect responsible brands to behave in responsible ways. I think, a lot of other brands should also join fight for this big common cause. People, nations and brands come together for a common cause. At the end, both these brands are talking to the same consumer which expects brands to behave in a certain way.”

Rival corporate giants have earlier strategically planned and come together for different causes. We have seen, Coca-Cola and PepsiCo setting aside differences to encourage young people to become sustainability activists. They jointly created a digital platform for young people to take action against climate change.

Similarly, McDonalds and Burger King had put aside their long-time rivalry for a good cause. Argentina’s Burger King launched their ‘Day Without Whopper’ in Buenos Aires where they stopped selling their signature Whopper burger and instead directed customers to their biggest competitor McDonalds in the hope of increasing the amount raised for Ronald McDonald House Charity in support for children with cancer.

Rajat Uppal, National Marketing Head of 93.5 Red FM hopes to see more brand gestures like these in times to come and in his words, “Every brand aspires to respond to cultural moments in real-time and so did Nike. There are times when brands need to move beyond their competitive bent of mind and come together for a larger cause. It is good to see two competitor uniting in support of all of the people fighting for change in the U.S. and across the world. The support showed by adidas to Nike’s at this time suggests that this issue is far greater than winning in business and shows both brands in a positive light. The bold gesture of supporting the competition also states the fact that brand rivalry was kept aside and that it’s a small example of the unity needed for bringing in the right changes.”

Brands At their Creative Best this Independence Day

Divya Dixit, Sr. VP and Head of Marketing at AltBalaji makes a statement by saying “Lets all keep our differences aside, to move together to a better future” and she adds, “I believe its a brilliantly unique initiative by both the brands to join hands for supporting this cause against racial discrimination and hatred. In the long run it will create further understanding and tolerance for consumers and also ensure Brands are seen as pioneers for harmony and sustenance”.

Lloyd Mathias, Angel Investor and Business Strategist, former APAC Marketing Head of HP, rightly sums up by saying, “I think that in times of crisis it’s wonderful for brands to be more human, and look beyond commercial motives.  In April we saw Apple and Google collaborate on contact tracing to fight the spread of the pandemic.

Now adidas has done well to support arch rival Nike by retweeting the Nike video – which in itself a great stand on the racial tensions in the US.  I think brands are increasingly recognizing the need to make their stand on key issues clear. This purpose driven mission is welcome and will go down well with consumes who respect brands and companies with values.”

adidas retweet endorses that it’s just no longer a brand to do well, they work towards fulfilling their mission to do good. The brand has an incredible power to influence – and their support of something like LGBT rights or black culture is commendable.