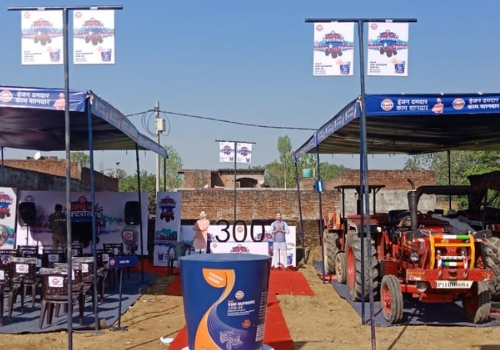 Pepsi’s Fading Marketing Glory, a Lesson for the Contemporaries?

This past month saw a unique event conducted in Uttar Pradesh by Gulf Oil Lubricants India Ltd – one of the fastest growing private lubricant players in the country.

To engage with the customers of the Agri-business category, Gulf organized the first ever “GULF SUPREME TRACTOROTSAV”, with all the groundwork and event design done by ZtoA Marketing Solutions,a Triton Communications Group Company. Gulf Lubricants give customers the benefit of providing their tractors extra power for a longer time, thus, taking care of all their issues around tractor performance. The Consumer Value Proposition of maximum power for 300 hours of servicethat is associated with Gulf was established across the multiple events conducted.

Held at ten locations across the state, the event was designed in a manner to keep the tractor owners busy & happily engaged at any point of time. The activities conducted were as following:

Oil change camps– The visitors left their tractors under the care of experienced mechanics, who would change the lubricant in their tractors for free, and take care of other minor problems

Tractor Races– Two participants competed to finish the circuit within a certain time. The one who finished in lesser time was declared the winner. The winners of each race were gratified, and the one with the best time amongst all winners was felicitated at the end of the day.

Tug of war– Two tractors were pitted against each other, with the more powerful of the two establishing their dominance over the other, imprinting Gulf’s Consumer Value Proposition to a higher degree

Expert Agronomist sessions– A Government affiliated agricultural expert was connected via video conference with the participants, thrice a day, to solve the queries related to farming & modern technical advancement.

Ophthalmologist-Free eye check – up held for the tractor owners

Interactions with experttractor mechanic ustads – The Ustads helped the consumers understand various tractor fixing hacks. These suggestions are helpful for them when their vehicle breaks down in the middle of the field.

The participants enjoyed their time at the event, as it was a welcome break from their day-to-day activities. The winners of the event had a lot to boast about, back in their hometowns, with awards and certificates given to the winners of the main events. Gulf looks forward to strengthening its ties with its consumers, and makes many more people understand why Gulf XHD Supreme is the best choice for their tractors.

Ravi Chawla, Managing Director, Gulf Oil explained the need for such an event stating, “Our idea for creating Gulf Supreme Tractorotsav was to think out-of-the-box and put together an unrivalled tractor sports event. In the inaugural edition, we were delighted to witness enthusiastic participation from stakeholders such as tractor owners, farmers and rural mechanics, all of whom are key customers for our agri-related product range. We appreciate that farmers are extremely hard working and lead much disciplined lives. We designed the Gulf Supreme Tractorotsav in a fun, engaging way that enables the farmers to take a short, indulgent break in their daily routine. “

Preeti Sawarkar, CEO of ZtoA Marketing,was visibly excited by the response of farmers to the “Gulf Oil Supreme Tractorotsav” says “The innovative strategy to engage with farmers has really seen early success.  Gulf Oil’s role in enhancing the performance of tractors was brought home to farmers in a unique manner that engaged and educated them simultaneously. It created a different level of excitement among the Farmers”.